An Interview With Good Fired Pizza: The Purveyors of Pizza That's Crispy & Chewy In All The Right Places

We sat down with James Woodley, one half of the team Good Fired Pizza, to talk about the perfect pizza, dough, our brand-new roof terrace, and everything else that'll be going down 30 feet above Kingsland Road. 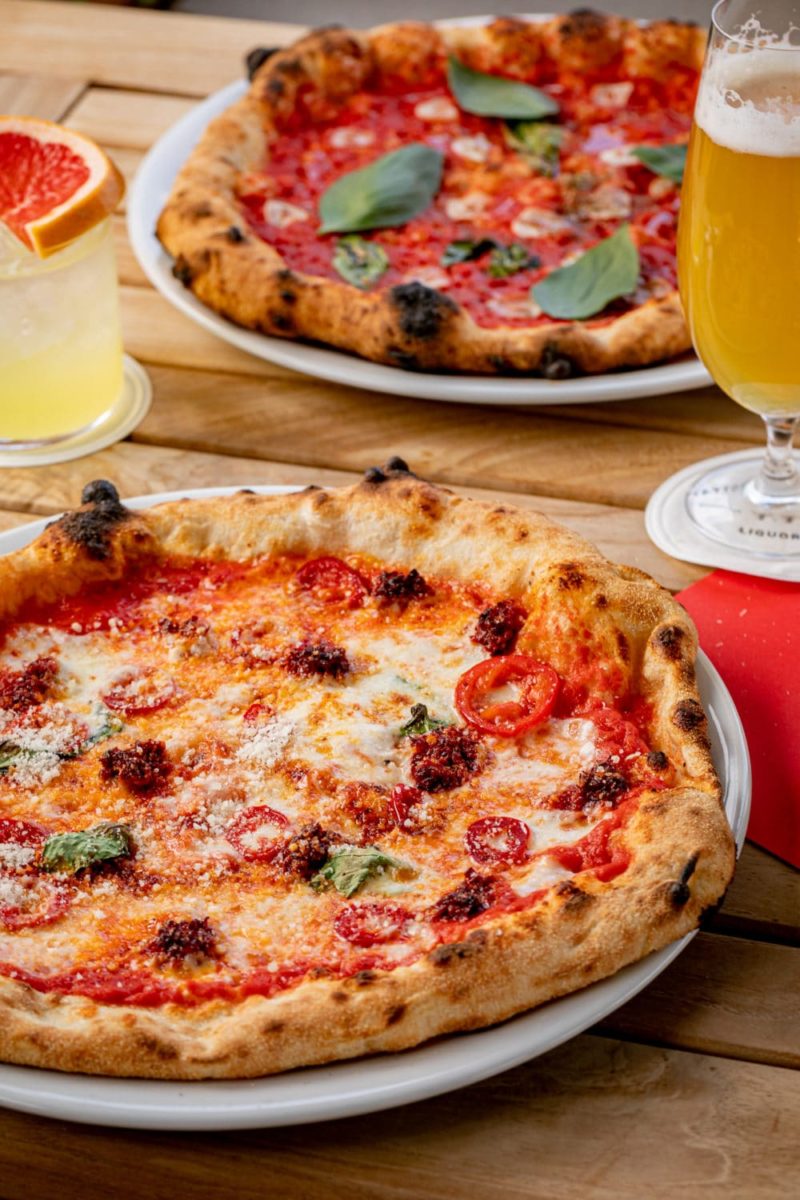 Thanks for taking the time out of your preparations to talk with us! Could you first please introduce yourself?

What did you guys do before you ended up making pizzas out on our roof?

So prior to this, we both worked in the public sector, Grace as a teacher in a secondary school, me as a specialist teacher for a local authority. So I was working for Suffolk Council up until about a month ago. So I was kind of juggling my full-time job with doing Pizza on the weekends and the evenings.

After a week or two, we were trying to find a decent pizza in our local area and we found one guy that does a weekly market, and he was doing some fairly decent pizza. And so we saw a lot of people using Roccboxes, and we were like, “That looks like fun, let’s get one of those,” just literally for our garden. 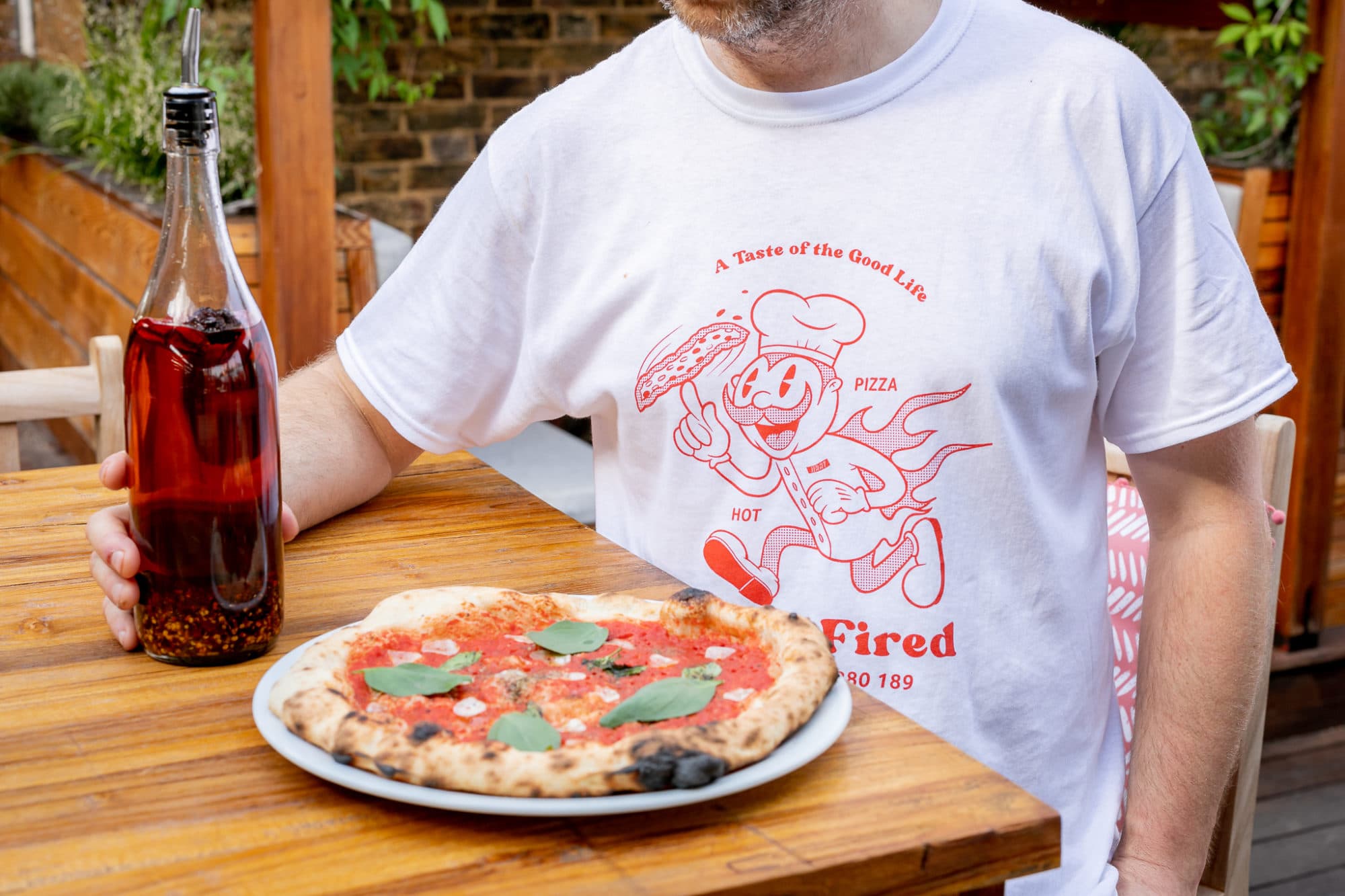 Where did the idea to open a pizza business come from? How did that come about?

So, as you may have guessed, we’re quite into our pizza, and we’ve now got a few favourite spots where we sell it in and around London. We used to live down in south London, where there are a lot of great pizza places so some really good inspiration. And then at the beginning of lockdown one, we were looking at buying a property, and we ended up moving out of London for various reasons. After a week or two, we were trying to find a decent pizza in our local area and we found one guy that does a weekly market, and he was doing some fairly decent pizza. And so we saw a lot of people using Roccboxes, and we were like, “That looks like fun, let’s get one of those,” just literally for our garden.

And just started making pizzas and the process of teaching myself the whole process again. So yeah, we were burning pizzas in this Roccbox just trying to figure out why they were burning and we, eventually, figured out. So yeah, that was where we started. And that trial and error process got us thinking; “Why don’t we just do a little pop-up locally and just see what the response is like?” We were trying to get a name together for ages, and everything we’d come up with, we were like, “That sound’s awful.” So we eventually settled on Good Fired because it was kind of like wood-fired – we weren’t using wood, so it’s kind of a play on words on that.

So a bit of a story of trial and error. Similar to this place, actually. They had no idea what to call it, so they just decided to call it Tatton & Thompson Liquor.

Well, we did think about that funnily enough. I really wanted to put one of our names to it because I really like that personal touch, I think it’s classic. We also discovered a guy in Watford, which is just down the road from us, who’s got this pizzeria called Vincenzo’s pizza. We ended up going there quite a bit because he’d just started up, and his pizza’s absolutely amazing. And his name’s Tom Vincent, and I remember thinking I really liked that personal touch. But because my name’s Jimmy, so when you type in Jimmy’s Pizzeria or Jimmy’s Pizza, you’re just going to get lost in the crowd– I think there’s probably about 10 places in New York city alone with that name, so we steered away from that [laughs].

The is just to firstly get some exposure from our side of things but also to kind of work with what’s been built here already and just kind of serve some really nice chewy, crunchy pizzas and get people buzzing about it 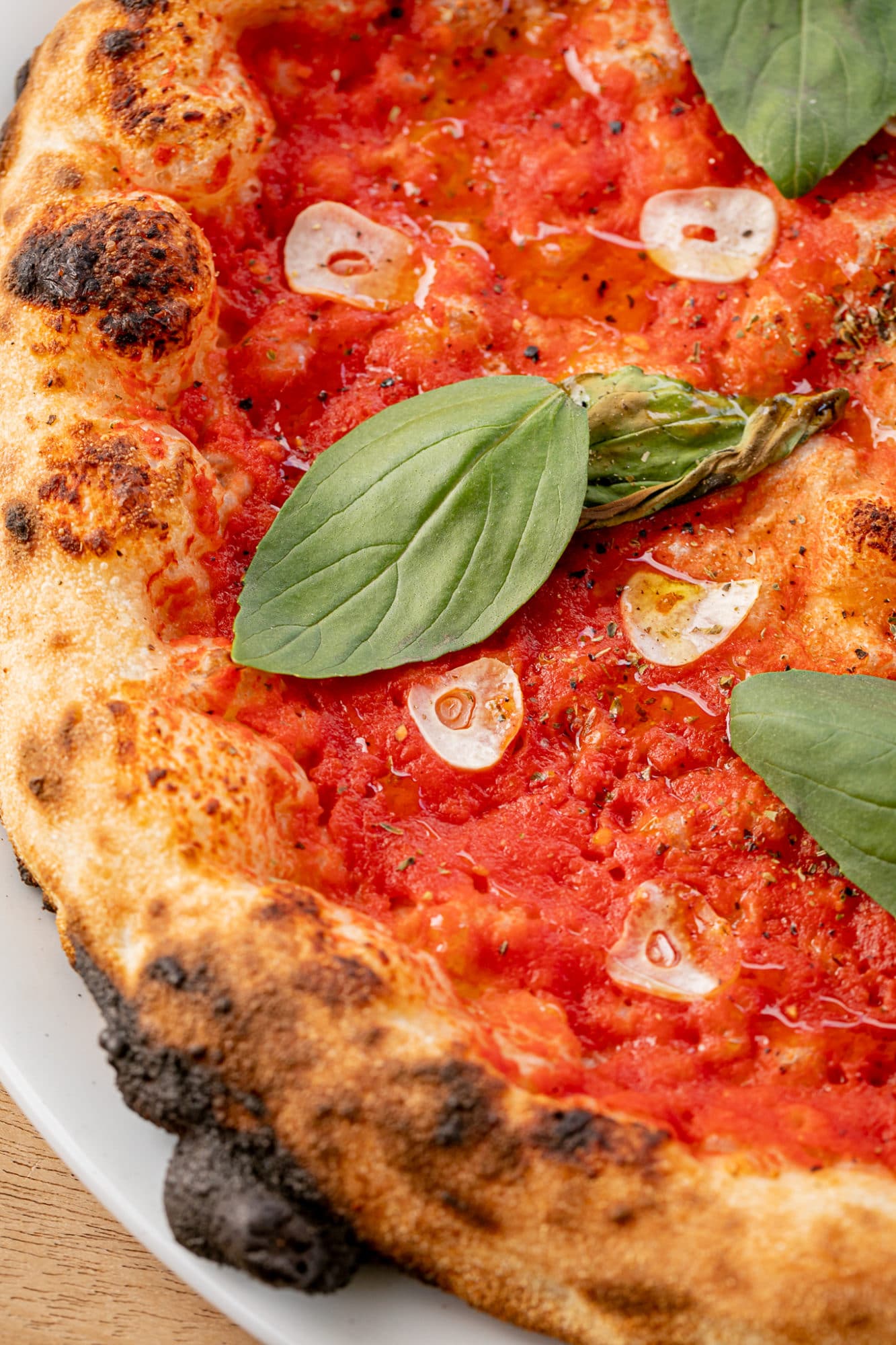 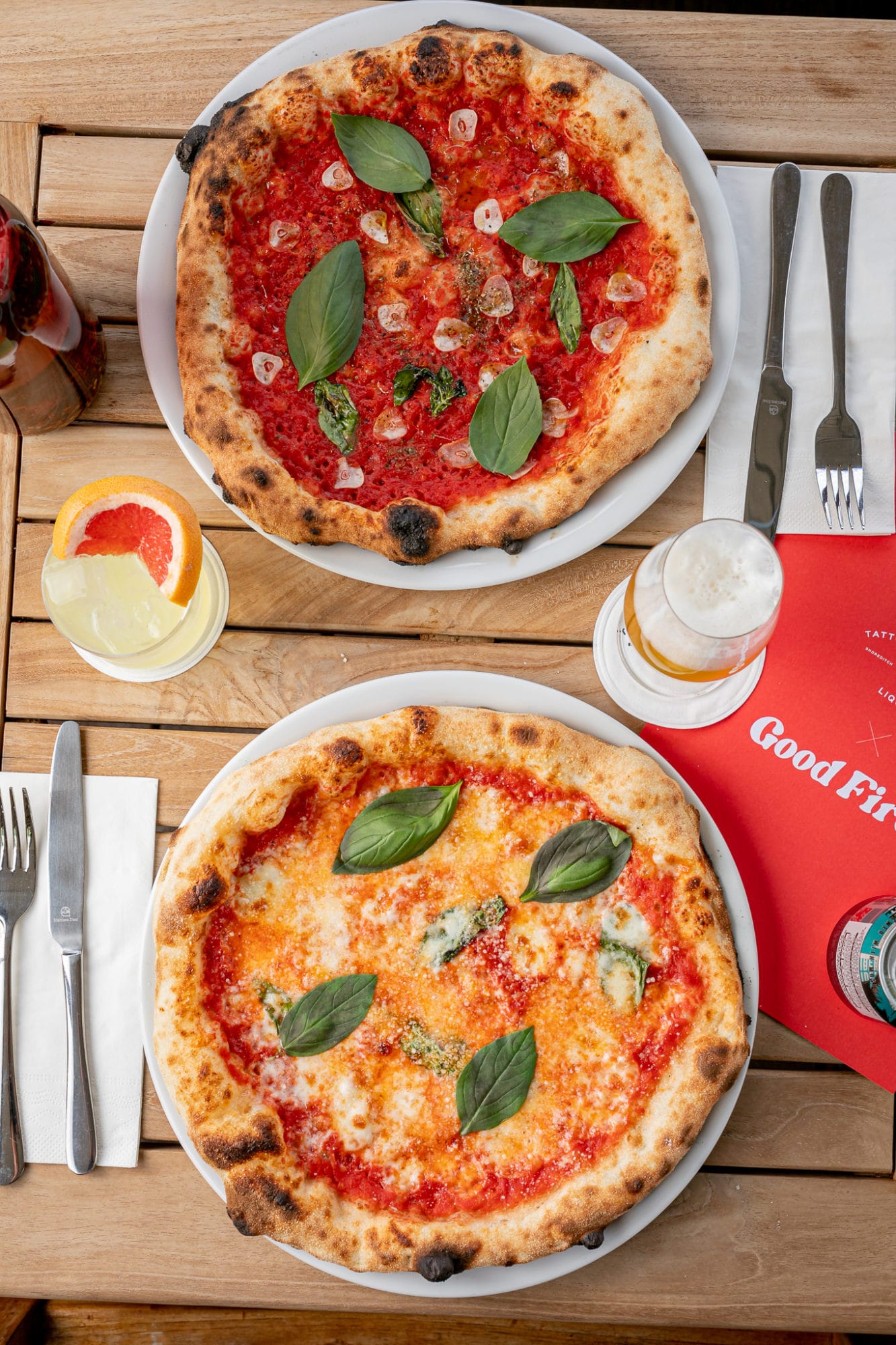 So could you tell us, on the back of the postage stamp style, what you’ll be doing up here with us on the roof terrace?

Yeah. I guess the plan for up here is just to kind of get some exposure from our side of things but also to kind of work with what’s been built here already and just kind of serve some really nice chewy, crunchy pizzas and just get people buzzing about it really. That’s kind of the main goal I think.

Lovely stuff. So let’s get a bit more technical, would you mind talking us through some of your processes?

Yeah, so the process is always changing because it’s environmental. For example, moving in here, we’ve had to change things quite drastically. Beforehand, we were doing room temperature fermentations because we found that worked really well in the kind of predictable space that we were working in, where the temperature sort of stayed the same. So once we nailed the type of dough that we wanted, we weren’t really battling with things changing too much. Obviously, when you work outside– because we were mobile so we were working outside, you’ve got certain things that can change the dough or accelerate the fermentation. So coming in here, it was like, “Okay. Let’s just start from scratch, really, and just see what we can do.” This is quite a warm building, so we’ve now gone to doing cold temperature fermentation instead of room temp. So it’s a little bit different and you do get a little bit of a crispier pizza when you cold ferment. I’m quite into that, so it’s not a bad thing at all. But yeah, it’s always evolving I think.

The dough has to be crispy and have some character to it, the needs to be a little bit of char for the bitterness as well, and the cheese ratio is so important – having a good amount of cheese. And Parmesan’s definitely a must as well. And fresh basil.

Yeah, we’ve actually had a chance to try your pizzas. They’re brilliant. A lot of the pizzas – now, I don’t have any issues with them – but the Neapolitan pizzas, they’re very chewy, almost too soft. I like having a base, something to sort of crunch into as well and yours really tick those boxes.

Definitely. You want the pizza to have some hold. And we were trying a lot of Napoli-style pizza from different places, and I do love that style of pizza, but it’s definitely designed to be consumed straight away. And because we were doing a takeaway style of pizza, as soon as you put that style of pizza in a box and you close that box, that pizza will not be good in about 10 minutes. It will pretty much deflate and become not a nice product. So that was something we considered. We were like, “If we’re going to do something takeaway, we need to maybe move away from that style of pizza a bit and look at maybe more of a New York-style pizza. Maybe an older style of New York pizza rather than the standard bar pizza that you might get.

I think the results are brilliant, to be honest. So I guess, from a personal point of view, what for you makes the perfect pizza?

Great question. The perfect pizza, for me, it’s got to be all about the fresh ingredients. So that ties in with the Neapolitan thing in that it’s all fresh, isn’t it? But yeah, the dough has to be crispy and have some character to it, the needs to be a little bit of char for the bitterness as well, and the cheese ratio is so important – having a good amount of cheese. And Parmesan’s definitely a must as well. And fresh basil. 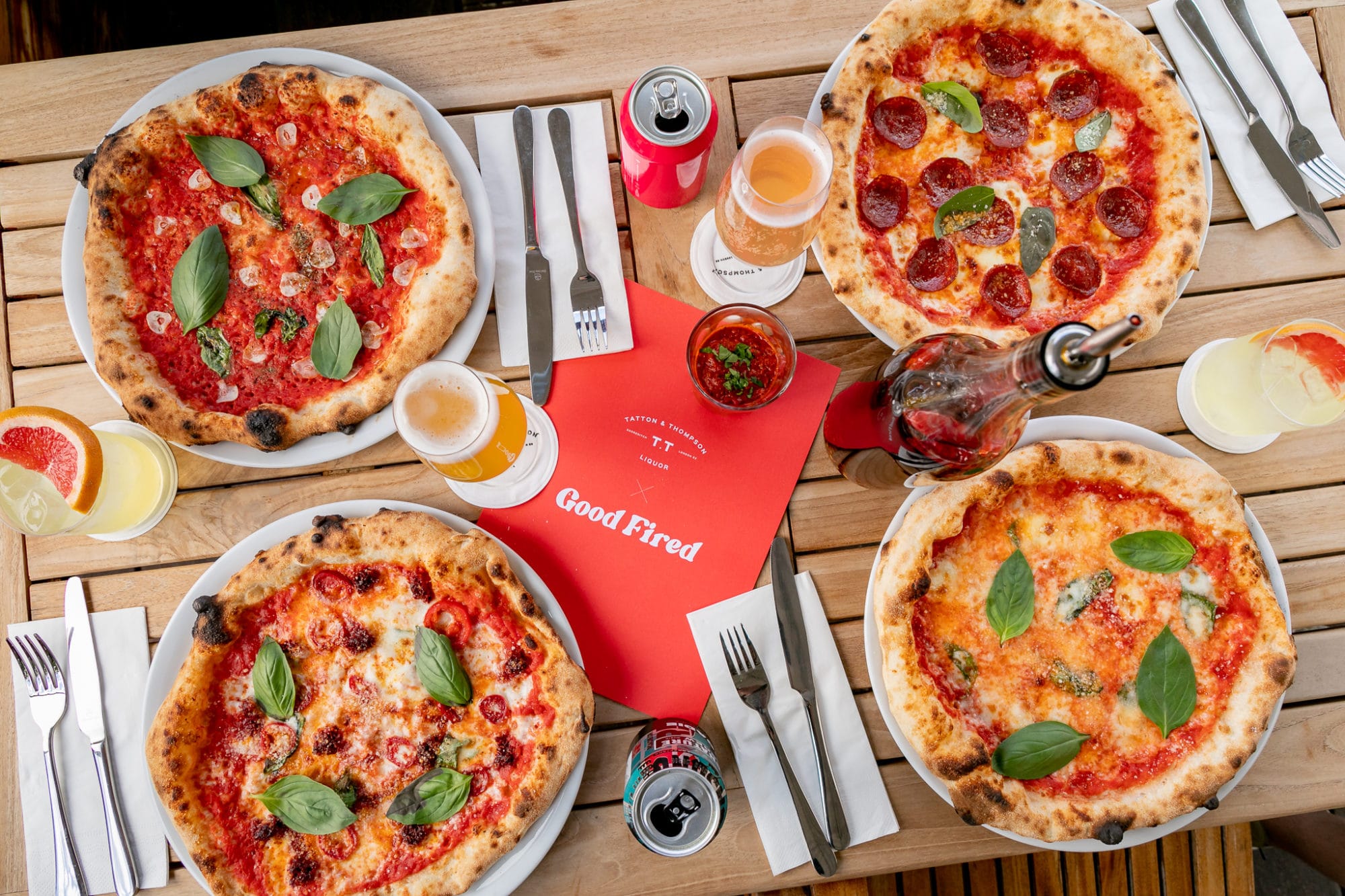 So it’s quite a simple menu, but simplicity is key as they say. We focused on the classics; marinara, pepperoni, margarita. With our mushroom pizza, we sort of tried to do something a little different by adding blue cheese and truffle oil just to take it to that next level.

Using your considerable expertise, could you just sort of talk us through some of the dos and don’ts you’ve come across and you’ve made when dough m aking?

I guess the worst-case scenario is that your dough is under-proved which will result in a fairly flat pizza that almost certainly won’t taste as good. The consistency of it probably won’t be very nice, either. It will happen to anyone making pizza for the first time, and it is a bit of a nightmare when that happens.I think you’ve just got to– if you’ve got orders on and you’ve got to work with what you’ve got in that moment, you’ve just got to try and learn from that, figure out what went wrong, why did that happen, and adjust your recipe. Just relook at things. So yeah, I suppose in terms of the dos, I think room temperature fermentation is probably the way to go. We’ve tried long fermentation, short fermentations. I like a 12-hour ferment because it’s long enough for the dough to kind of get nice and bubbly and kind of wake up. And yeah, that’s the ideal scenario, a 12-hour room temp ferment.

Talk us through some of the pizzas that have made it onto your debut menu – any highlights or things we should go for?

Sure! So our menu is pretty similar to what we were doing when we were doing the mobile takeaway. It consists of about six pizzas, then a weekly or fortnightly changing special, as well as garlic flatbreads and charcuterie. So it’s quite a simple menu, but simplicity is key as they say. We focused on the classics; marinara, pepperoni, margarita. With our mushroom pizza, we sort of tried to do something a little different by adding blue cheese and truffle oil just to take it to that next level. And then with our pepperoni pizza, we’ve been given a really good recipe for a chilli honey from my friend in Watford who I think I mentioned earlier, Vincent. Everybody that tries that honey thinks it’s amazing, so hats off to him for the recipe. And then with the garlic bread, we really thinly slice garlic and then we add sea salt at the end and a drizzle of olive oil and just keep it really simple and rustic. And then for the people that like things spicy, we do a Nduja pizza, which has got lots of Roquito peppers so nice and spicy. We’ve also got a few vegan products that we offer as well, and we can suit our menu to adapt for people that want a vegan option. We will look at offering a gluten-free option in the future as well. We’re just trying out a few samples of things at the minute, so that will be available at some point. A bit of something for everyone, I think.

James, Grace and Good Fired Pizza will be spinning out some seriously good pizzas out on our roof terrace every Tuesday-Saturday from afternoon ’til late. Book yourself a table while availability lasts! 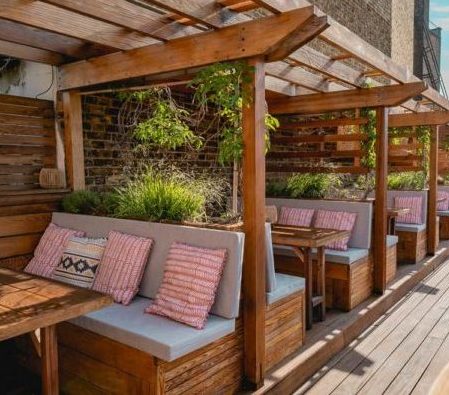 BOOK A TABLE ON OUR TERRACE
View our Virtual Cocktail Classes