After the buzz, that uniquely sympathetic and electric sensation, the thing I find the most remarkable about mezcal is that it took us all so damn long to twig. How can this be? That arguably the most fascinating, complex and versatile spirit on Earth has only just come to the attention of us throngs of thirsty aficionados out here in the rest of the world? 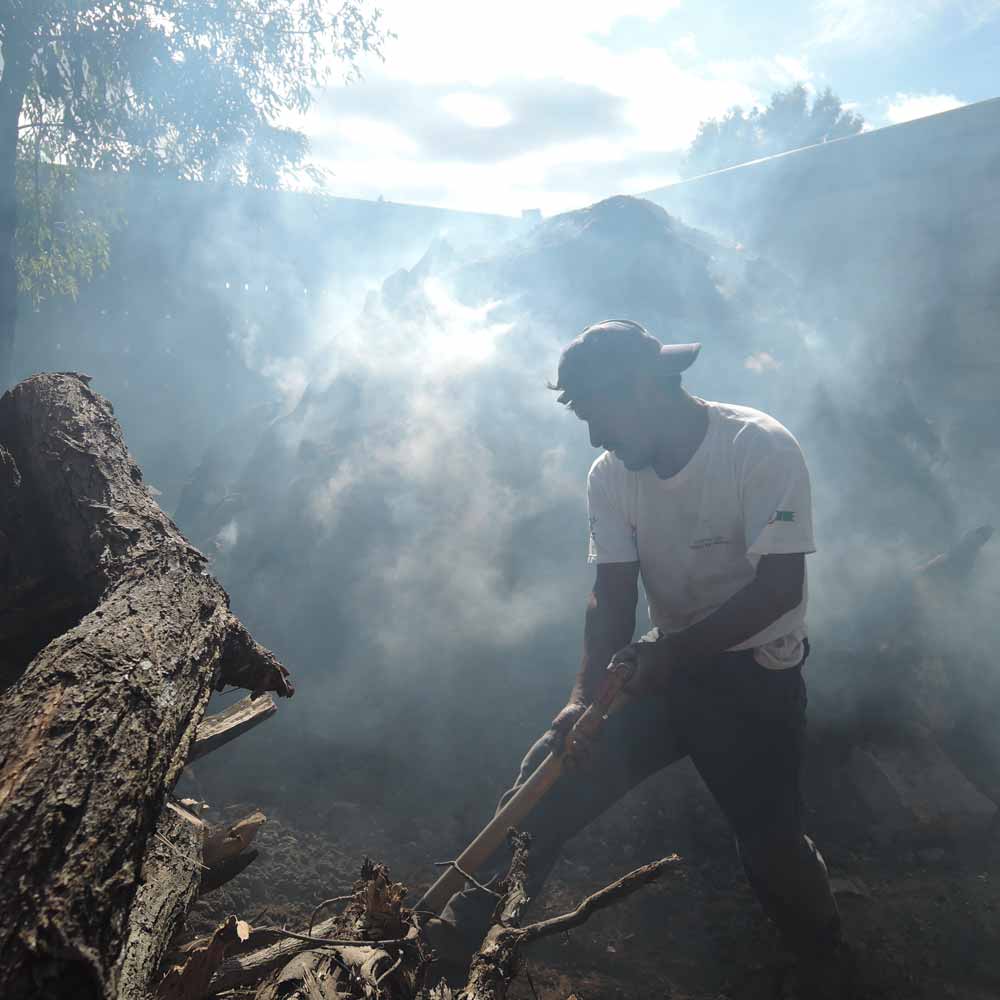 Well, the answer is a complicated one. Mezcal – which is to say, Mexican agave spirits of all type – has, over its 400 years in production, not had an easy road, with prohibitions, taxations and, most importantly to this article, exploitations, often demanding a culture of secrecy. In now-famous producing regions, as recently as 1984, it was still illegal to make the stuff! Mezcal has been clandestine by necessity.

And while the covert work of grandmothers smuggling garrafones to market swaddled like babies, and the hand carving of rock pits to conceal fermentations – the stage in mezcal production otherwise most vulnerable to detection – cannot have felt fair, it can be said that this fantastically long period of forced gestation has a gleaming silver lining; that which brings us all to London Mezcal Week in 2019 – exquisite mezcal. 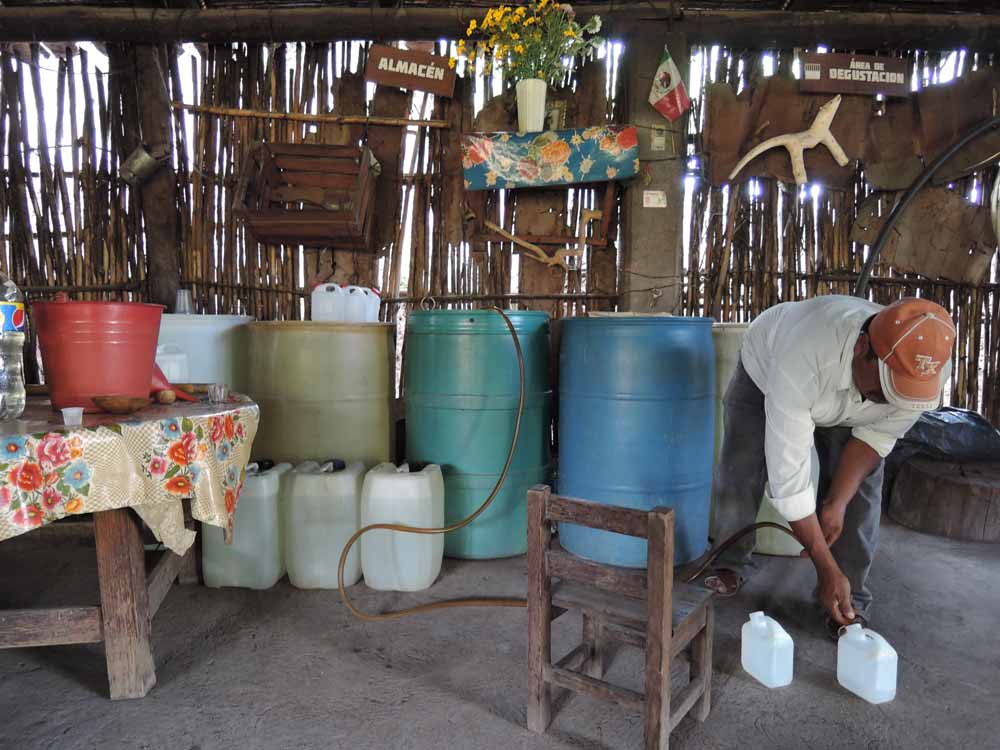 Above: A maestro mezcaleo in selling his wares.

Perhaps then, without the external pressures of various authorities, from Castilian overlords to corrupt politicians, all seeking their profits and control, the many producing regions in the vast lands of Mexico might also have gone the way of tequila and tipped into relative homogeny.

But it has survived. And what we have discovered instead in our first few sips of the spirit-marvelous is something wildly diverse. This is partly because of the struggle to make batches by moonlight on the edge of the village has left us with hyper-localised, unadulterated expressions made from an unknown range of still wild agaves that are happy growing in their natural, abundantly biodiverse habitats. Long may it be so. It’s a remarkable situation indeed and the reason we must now tread with the greatest of care.

A denomination of origin (DO) is, by definition, there to protect and preserve the quality and the culture of a product that is unique to the place in which it is made. Mezcal makes for an ideal candidate, surely. Only how do you apply a DO to such variety? The job of the Consejo Regulador del Mezcal (CRM), the government body set up to oversee the DO for mezcal, is an awfully complicated one.

Above: Preparing to roast at La Clandestina palenque, where scaling up has been done in an environmentally-minded fashion.

Since it’s inception in 1994 the terms in which it sets out the rules for what can and cannot be called mezcal has changed, and changed, and changed again. The present version, brought into effect in April last year, can be seen to be failing, with scores of families steeped in mezcal traditions being barred from using the very name of what it is that they make. But most ominously, this version of the DO makes it very clear that it is opening doors to large-scale, multi-national corporations making it especially easy, and therefore enticing, for them to now work with mezcal in business models that suit their needs.

“The specter of colonialism has returned, this time in a new and friendly, Instagram-ready form, to worm its way into the strongholds of the culture at last, and to rinse it.”

Thankfully, there are a number of brands who do wonderful work within the parameters of the DO, bringing clear and delicious representations of the culture to market, even managing to help their producers scale-up their productions to meet demand without detriment to their mezcal, their communities and the agaves themselves.

But there are companies that lack the sensitivity, insight and intention required to achieve such a feat and it is these, now handed a carte-blanche by CRM, that pose a real threat to what it is we love. These brands (who will remain nameless here) due in part to their simple, wishful thinking are winning major investment and, whether they realise it or not, are dissolving the intricate and precious community/land dynamics that have been so well protected through brave acts of defiance for so many years. It is heart-breaking to watch. The specter of colonialism has returned, this time in a new and friendly, Instagram-ready form, to worm its way into the strongholds of the culture at last, and to rinse it. 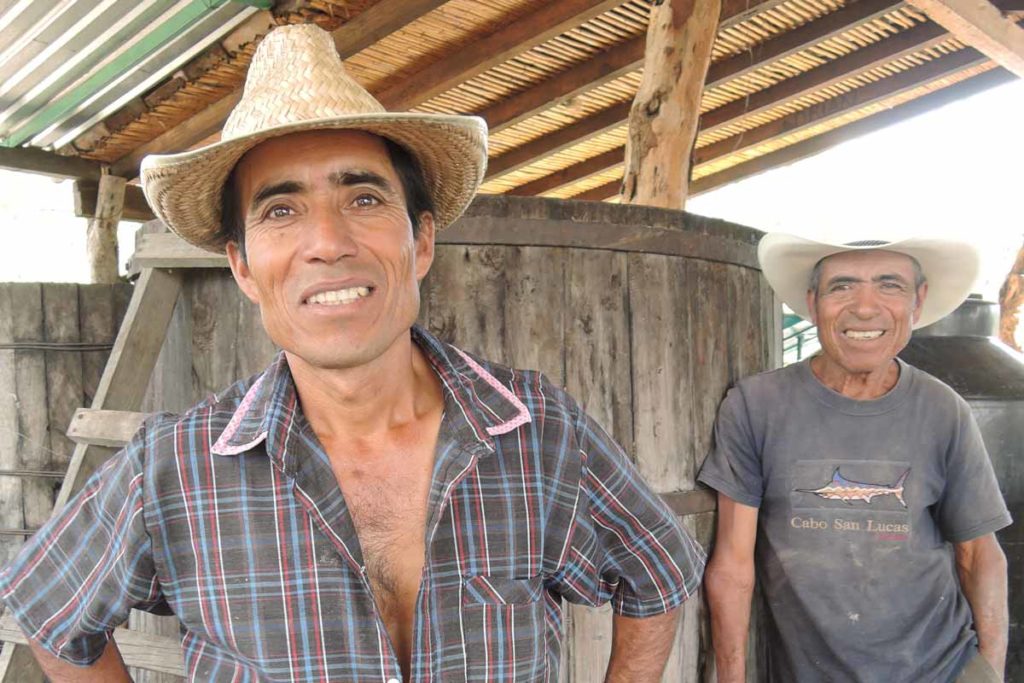 Above: A father and son stand in front of their life’s work.

But there is hope and, wonderfully, an opportunity to make a difference lies with us, the consumer. Over 90% of all agave spirits bottled in Mexico are exported. The decisions we make, our choices when selecting a sip or a bottle, are keenly being observed by the drinks industry. If we spend a little more – for something that tastes and feels a whole lot better – we are likely helping to steer businesses and policy towards a higher standard of responsibility. I encourage you to ask questions about what it is you are drinking. Being able to ascertain exactly who the maestro/maestra was who made your mezcal is often a sign that your money is going towards a wholesome project. And there are plenty of them to choose from these days.

“The traditional drinks industry model seems to be to find one producer, sign an exclusivity agreement, finance upscaling of production, and market that brand as the world’s best. And though this fundamentally misses the point of what’s interesting about mezcal, industry regulation appears to encourage exactly that.”

One new and exciting business model that has recently emerged is found here in the UK. Jon Darby, whose roaming mezcaleria pop-up Sin Gusano began in London two years ago, is now sourcing mezcal directly from a wide variety of small-batch producers, paying them the local going rate (typically higher than brands will with their long contracts) and making these available at Sin Gusano as well as via a subscription basis for the UK. By buying from many different producers, he avoids placing undue pressure on his suppliers to change their techniques while offering us an appropriately wide range of mezcals.

Jon started work in banking but stepped away, appalled by the practices of the financial sector, and came under mezcal’s spell while travelling Mexico. However, what he found as he because involved in the industry side, alarmingly paralleled the corrosive situation found in the rampant late-stage capitalism he was trying to escape. I spoke to Jon about his project:

“The traditional drinks industry model seems to be to find one producer, sign an exclusivity agreement, finance upscaling of production, and market that brand as the world’s best. And though this fundamentally misses the point of what’s interesting about mezcal, industry regulation appears to encourage exactly that. To get their product to an international market, a producer needs outside investment. That investment is increasingly coming from big drinks industry players with their index listed share price to worry about, which always leads to prioritising profit over people and the exploitation of the source material – in this case, agave and its farmers.” 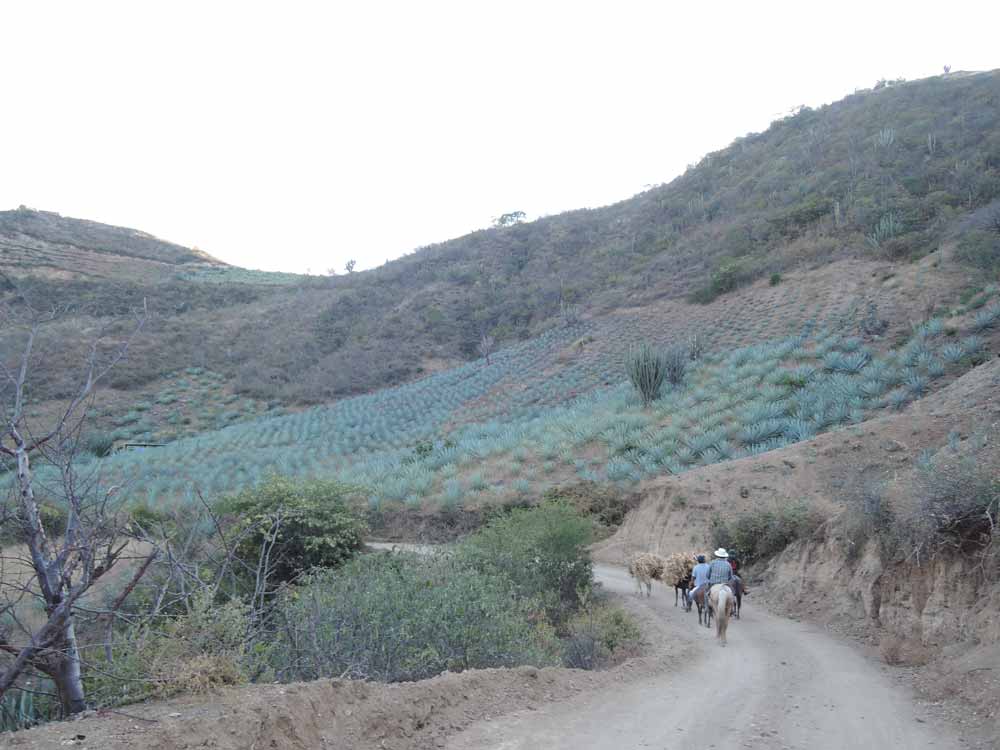 It also commonly leads to foul play. Brands that are straining to meet their investors demand often resort to collecting batches from a number of different producers to mix together in a blend. Keeping tabs on the quality of all the stages in production at each palenque is difficult at best. And this tactic is now being supported by the DO with the appellation of artisanal mezcal.

To avoid these problems, however, another venerable approach has been made by Esteban Morales, a brand owner from Guadalajara. Responding to industry demand for a ‘more affordable’ bottle in his already-wonderful Le Venenosa range, he created a new product called Tabernas (around £40). Each year Tabernas is made by a different producer altogether, avoiding the need for that producer to in any way alter his/her techniques or for the community to absorb a sudden burst of increased financial investment. Working in this way there is enough money to have a good year with plenty left over to experiment and develop the veñata, something most producers, being artisans, want to do.

Needless to say, it is important for a producer to make good money. No one could argue that it would be wrong to deny well-earned wealth for someone’s work and talents. The issue, however, is wealth in relation to what?

Above: Family life on the palenque.

The standard of life in Oaxaca for example, it can be said, is incredibly high compared to London or New York while incomes are relative to the amount of money required to live well.

The concern is that mezcal is being developed under the influence of outdated and malign neo-liberal attitudes; namely that there must be business growth and expansion – upscaling – under the premise of unlimited resources. To zoom out for a moment, one can argue that this is the very approach that has brought our planet and everyone on it to the bring of environmental and, therefore, societal disaster. Mezcal is a micro-scale example of our world’s problems on a macro-scale.

And as a mezcal-lover, you have the power to do something about it. Where the CRM has yet to succeed, you as the passionate enthusiast can make effective steps towards protecting the thing that you love.