The Story Behind The King of Soho with Alex Robson

We sat down with Alex Robson, co-founder of the King of Soho Gin, to talk about her career before the drinks industry, some of the folklore surrounding the King of Soho, and - of course - her premium London Dry Gin. 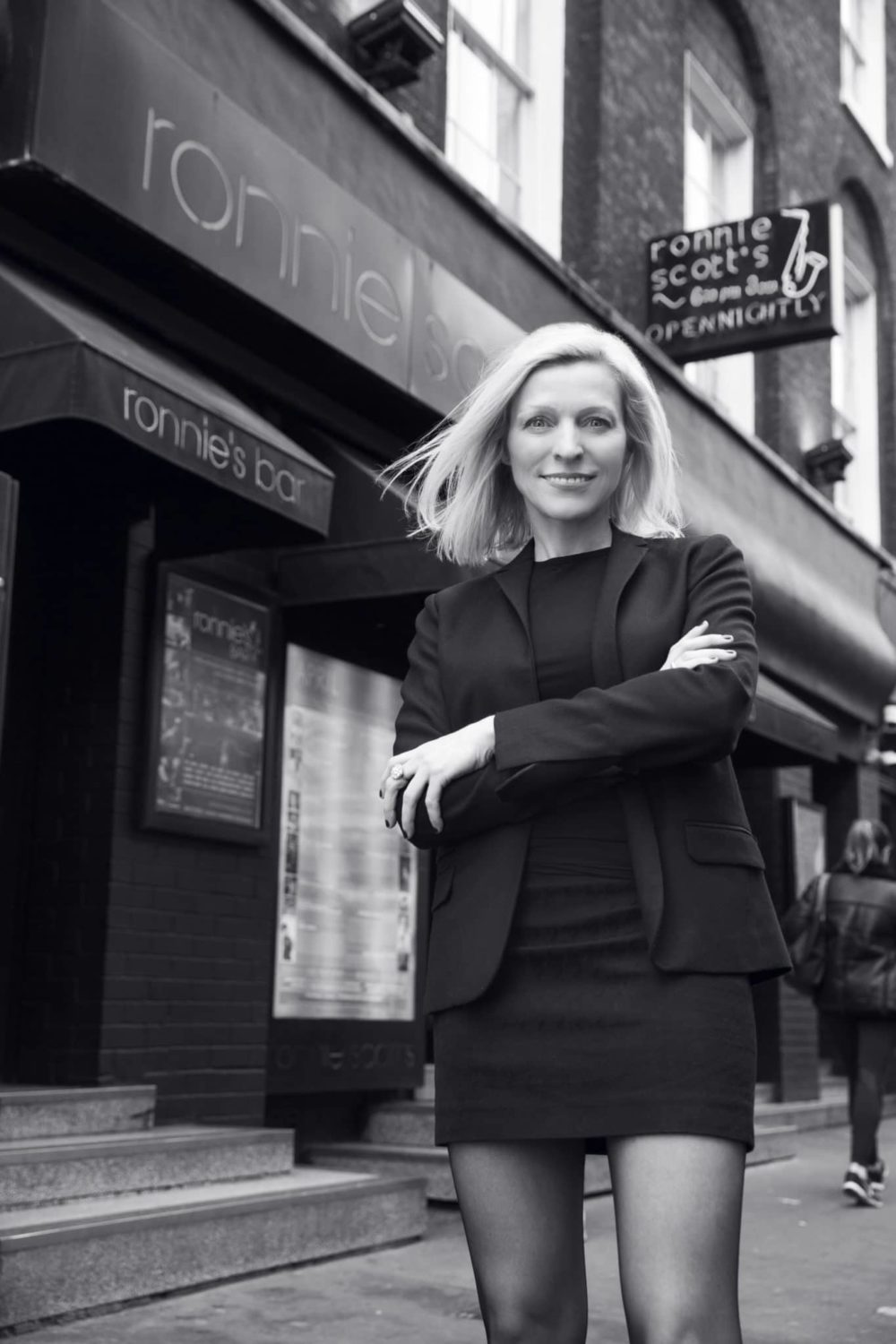 So first off, for those who perhaps don’t know you, could you please introduce yourself for us?

Sure, I’m Alex Robson. I’m CEO and female founder of The King of Soho Gin.

And how did you get into the drinks industry initially? What’s your story?

Oh, it was as simple as in an epiphany sitting in a bar with Howard Raymond, who is my business partner. I mean, we are drinkers as opposed to distillers, so we were very much approaching it from the angle of, “We want to create a spirit that we enjoy and share it with the world.” And this wasn’t long after the death of Howard’s father, who was Paul Raymond, the original King of Soho. And we thought, what better way to celebrate his life and his Soho legacy than to create a gin in his name?

Gin, as you know, back in the days of our fathers was a very popular drink. So we were very much pulled on an emotional level – I mean my father was a great gin drinker, that was his thing. He’s always been a cocktail guy and a great fan of gin and tonics. But we named it after Paul because it fitted our mood at that time, and I don’t think people would recognize the name Dr Robson, would they? But getting back to the Soho. Soho is about fun. Gin is about fun. And that was very important to us to create a delicious, beautiful liquid in a bold and colourful bottle that represented the things that were unique to Soho and Soho life. The creativity, the effervescence. There’s so much there, isn’t there? You just want to touch and feel it and grab it. And everybody grabs the bit that appeals to them.

We’ve also gone with this anything-goes mantra. We adopted that quite wholeheartedly because, number one, I drive the business and it very much suits my persona. No judgement here! You drink your drink any way you like. Whatever is going to work for you, works for us. A King of Soho connoisseur and adventurer is somebody who is wanting to experiment and be challenged as opposed to somebody who just wants to sit with your bog-standard London dry, which is why it was very much experimental back when we launched seven years ago. So, in that vein, we were led by the grapefruit botanicals. That appealed to us because grapefruit, as you know, is the forbidden fruit, and we quite like that around here. It’s an appeal to our sense of naughtiness. Anything that’s naughty has got to be good. Hasn’t it?

It’s a mantra that has clearly served well so far! So I guess, turning more towards yourself, again, what were you doing before you took over the reins in the drinks industry? What was your life before King of Soho Gin?

My life? Oh, I’ve led quite a varied life. I’m well travelled. I’ve lived all over the world. I started out pretty traditionally, though; I went to university, graduated – tick that box – and had a brief flirtation with The City, brief being the operative word! Not long after that, I decided a slightly more adventurous life was for me. So I went off to Russia and lived there for a few years. And then I ended up in Holland, where I did supply chain management, which sounds a bit boring, but has become incredibly useful with the gin, as you can imagine. There is, of course, a practical, boring administrative side to running a business, which we’re not going to bore the readers with! I also worked for a chap called David Scott, who was the commander of Apollo 15. And as part of that job, I actually touched moon dust, which I don’t think many people can say about a previous job description, so I did quite a lot. And just before I started this, I was essentially working as a business consultant, helping people with different projects and different elements of their business. And then, of course, I found my home in the drinks industry, a place where my creativity and love for gin could flourish [laughter]. 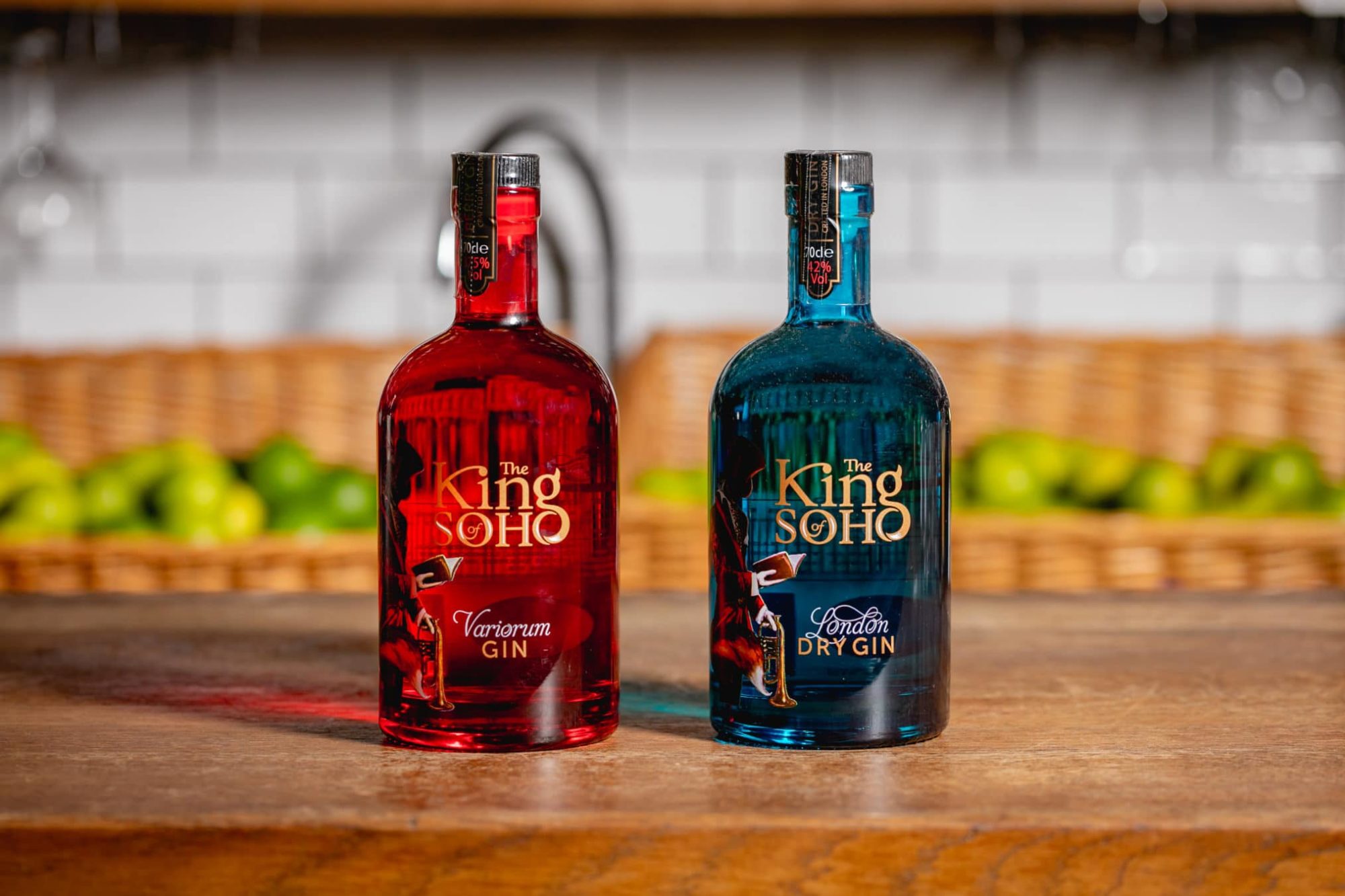 That’s definitely a ‘road-less-travelled’ case, then! So can you tell us a little bit about the liquid itself that goes into the bottles? Where do you see it working in cocktails?

Well, it’s distilled in a steel pot still. It’s a London dry gin, so as you know, that means that we don’t add any sugar added after distillation. That’s the London dry. We also have a pink gin, which is slightly more contemporary. We used the London dry as a base, and we add fresh strawberry after distillation. With the London dry, it’s 42%, five times distilled, very smooth. Makes a very good martini or gin tonic with a slice of pink grapefruit garnish. The key botanicals, of which we use no less than 12, include some grapefruit, classic juniper, cassia & angelica root, sweet orange peels, and liquorice because you’ve got to put the aphrodisiac in there, haven’t you? But also, as well as rounding the gin off, you end up with a little bit of spice on the back of the palette when you drink it. The citrus lends a bit of sweetness, and the cassia and the angelica root balance it out. Then there’s the pink gin, as I mentioned, which we launched in 2018, around the time of our fifth anniversary. By lowering the ABV you can really feel the chamomile, which is actually an original recipe, and the botanicals. It’s a little bit more delicate. Strawberry gives it that sort of strawberry and cream, luscious feel. I’m addicted to both my gins, honestly. Am I allowed to say that? [laughs] But the pink one, just on its own over ice is perfect. I mean, they’re great liquids. They taste really good. They make great cocktails. They cater to different moods or different palettes. It really depends what you’re trying to get out of your gin. As I said, there are no rules on it. But certainly, the London dry makes a very, very good martini.

Both our gins are distilled in London, which a lot of London dry gins aren’t, and that was very important. Our distiller is Charles Maxwell, 11th generation master distiller, and his family started distilling gin at around the same time as the word ‘Soho’ was coined by the first Duke of Monmouth as a name for that district of London. So there’s a bit of serendipity there which I quite liked at the beginning – slightly fated, perhaps? Regardless, not being distillers ourselves, we went to the best. We created a flavour profile, took it to Charles, we asked him to make our gin, and he nailed it. So it’s very much something that we love and we drink ourselves, which I think is important.

What drew you to TT Liquor in the first place? And what made you guys decide to work with us on our virtual classes?

So we worked with you, as I said, on the cinema nights in the past, so we knew you as a company. And we just loved the aesthetic and artistic style, which really chimes with our own, so when we heard about the virtual masterclasses, we were keen to get involved. It sort of shows your entrepreneurial spirit and your adaptability in what is an extremely difficult environment, and that has to be respected, you know? And also, because we know you, we know what you do, and we know you do it very well. And that’s very similar to ourselves. And so we were keen to be involved and it’s always nice to give people the opportunity to experiment in their own home, to be the king of their own cocktail shaker, if you like. And it’s great to be able to help you enable people to do that. It’s a bit of a no-brainer really, isn’t it? 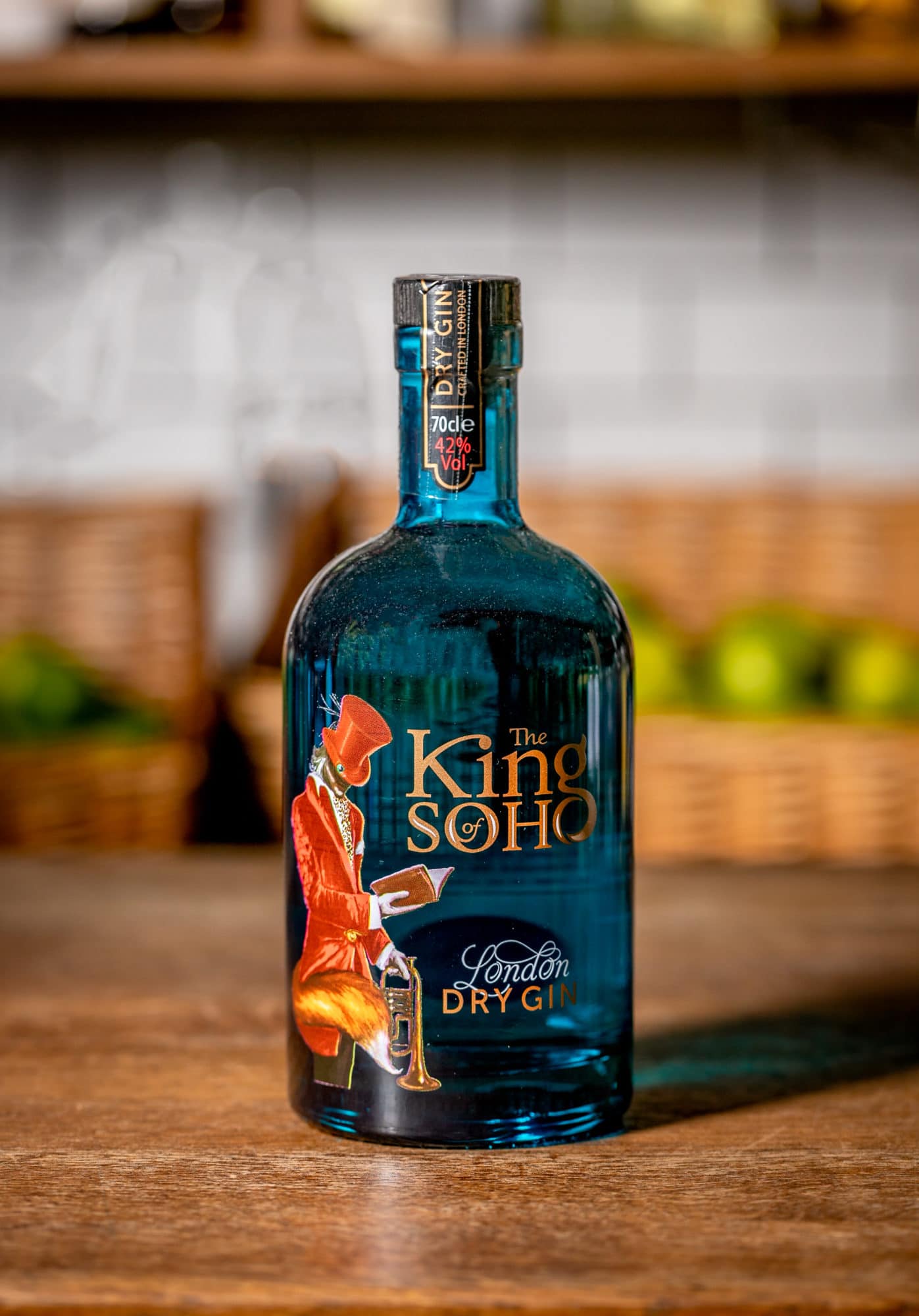 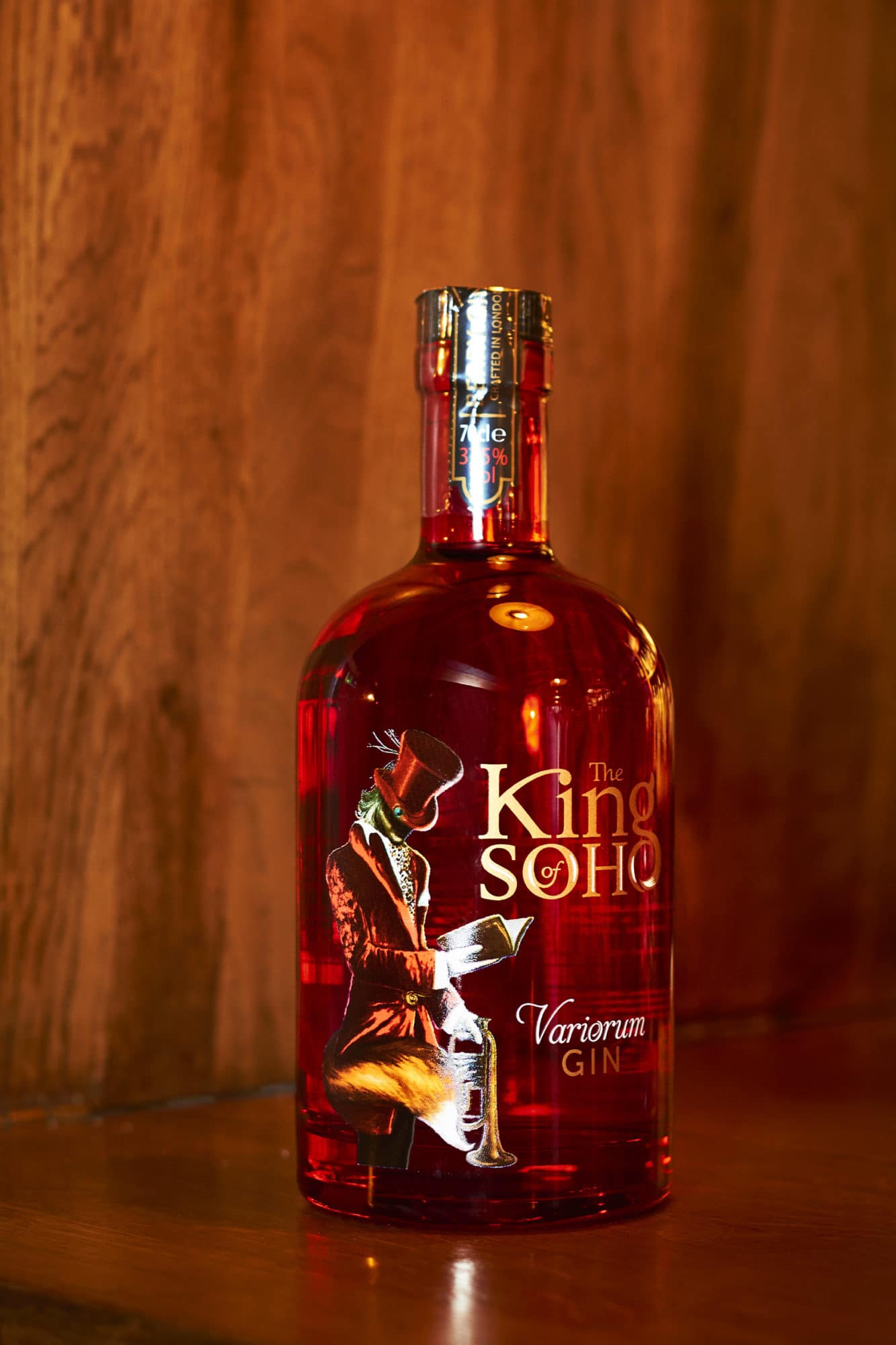 Any plans on the horizon you can reveal in terms of The King of Soho’s future? In as far as it’s possible to plan anything in this day and age?

As you say, we’re in unusual times and I’m looking at the moment to grow the brand out of that, so I’m hiring. I’ve had a new Head of Sales. I’ve got somebody else starting next year. So we’re actually expanding out quite a bit. We’ve got a couple of initiatives in what I would call a ‘holding position’ whereby we can help to support the bars and restaurants in our community to come out this lockdown period. But as you and I know, it’s very difficult to implement it without being fully aware of the rules, which is why the plans are there. They’re ready. We just need to get that green light that the environment is one where we can action it and that places are actually going to be open, which I think is the point, isn’t it? And also, I’m looking at developing a couple of new lines. Not necessarily spirit-led. It’s quite exciting, but I’m going to have to keep that under wraps. But watch this space [laughter]. There is a horizon in front of us and we will get there, you know?

To be honest, I don’t have a favourite! I’m a little bit of a flirt when it comes to the cocktail [laughter]. Obviously, I always love a good martini. So whether it be the pink gin or the London dry, I do like a good martini. But I’m not constrained by one drink. I mean, there’s just so much choice, isn’t there? How do we choose? At the moment, I’m having a little flirt with a Soho Cobbler, which is the King of Soho rye, cream of sherry, and some sugar syrup over ice. And literally, I’m just so enamoured by it I can’t even tell you. And it sounds quite old-fashioned, but I think it reminds me of Christmas, my family Christmases. The sherry trifle and my auntie Minny, who was quite a character. And she used to have that sneaky glass of sherry on the side which none of us were meant to know about when she made the trifle. Maybe I’m just feeling little bit nostalgic. Maybe that’s a symptom of COVID. I don’t know. That COVID period, you know? So I’m having a bit of a Soho Cobbler moment. But something else will come up in the new year as I discover new things. But I do like a good martini. And I’m also very partial to my Negronis! As I said, it’s just so difficult to choose. 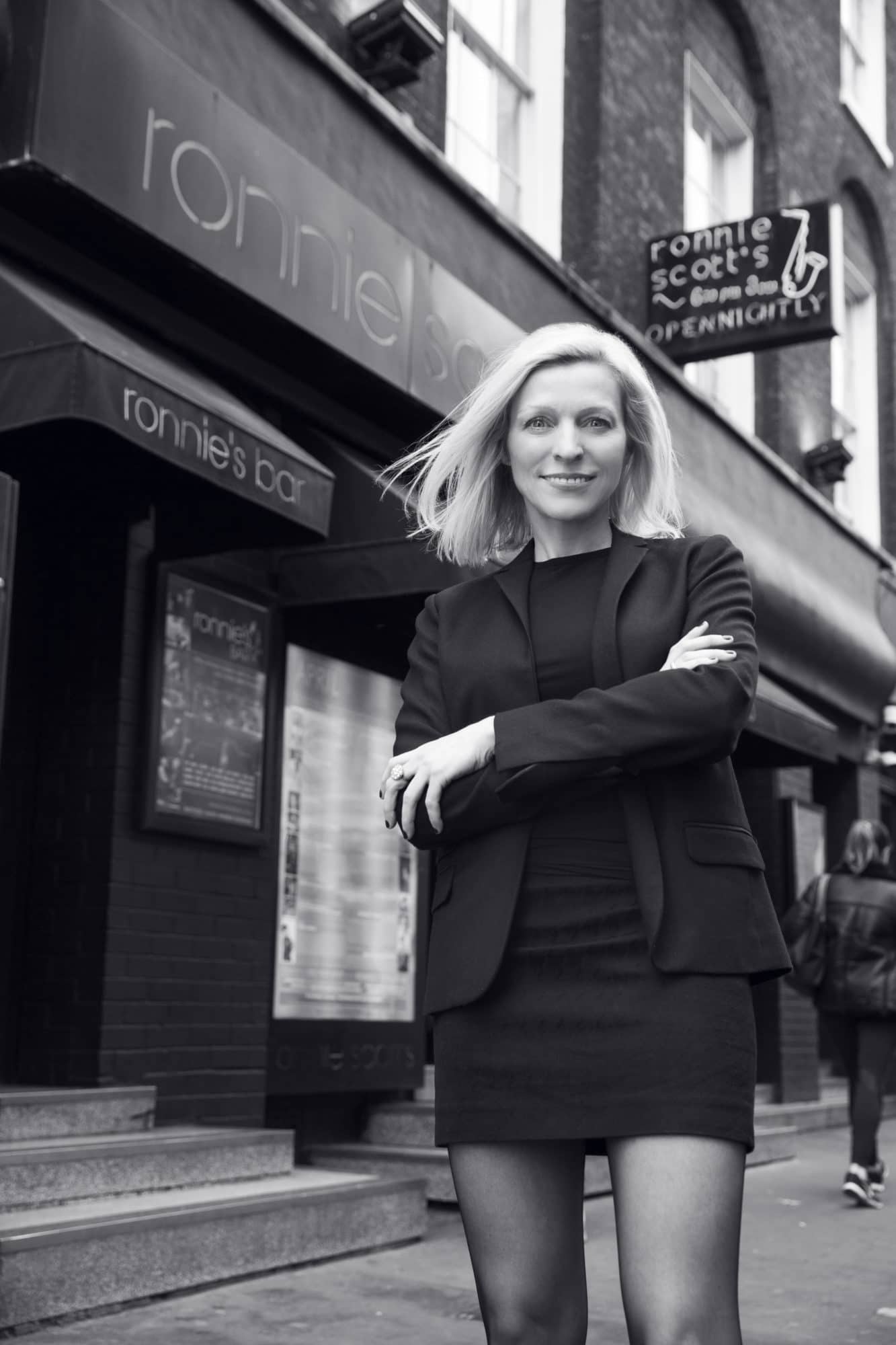