Ice, Ice Baby: How To Make Perfect Ice At Home

One of the most important elements of cocktail-making and of drinking, in general, is the humble ice-cube. 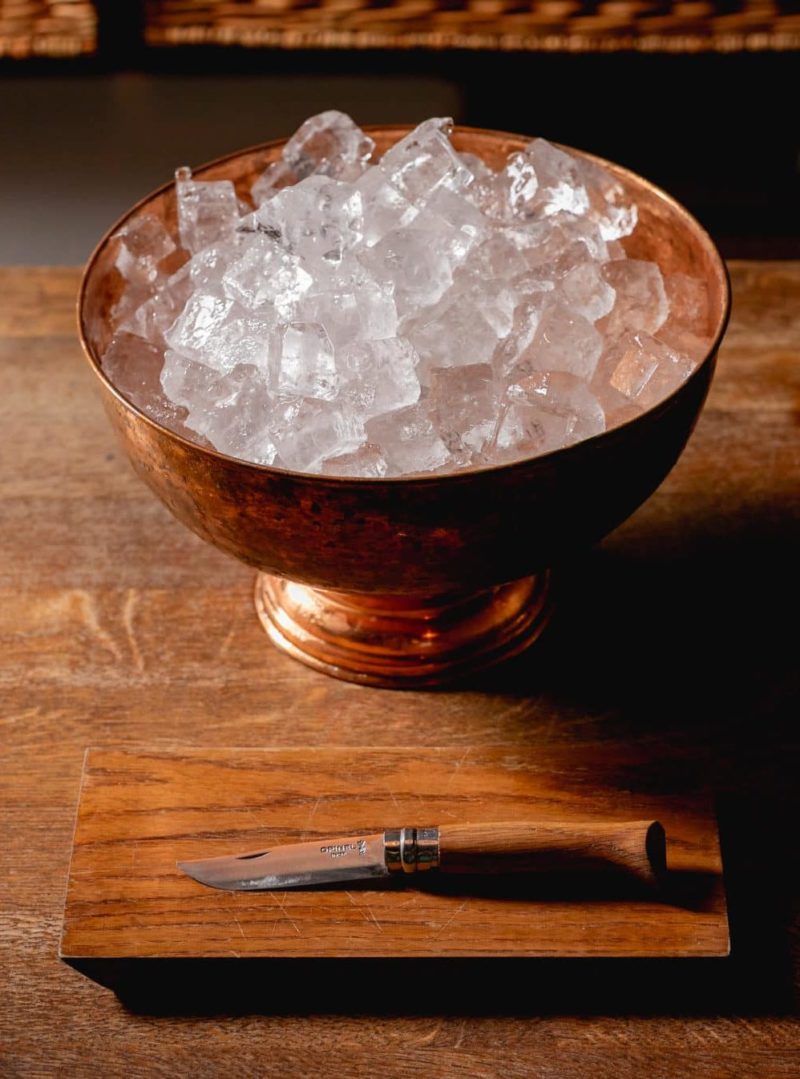 This simple ingredient helps to transform a mixture of spirits and juices into a cocktail. The addition of ice to a drink enhances flavour, texture and overall experience and any budding home-mixologists would be remiss to overlook this cold component.

Something that often surprises people when they first start mixing drinks at home is the sheer amount of ice they need to use. It’s a common misconception that customers are being shorted when they order a gin and tonic or a rum and coke and the glass arrives filled with ice. A good high-ball – or any drink that contains ice – should contain it in as large a quantity as the vessel will allow. Your spirit of choice will always be measured, meaning that less ice will only result in more mixer and therefore a warmer, more watered-down drink.  Similarly, when mixing and serving cocktails, in general, the more ice you use, the better your drink will be.

There are a couple of reasons why we add ice to drinks or cocktails; first, and perhaps most obviously, is we’re trying to cool the drink down. Secondly, particularly when making cocktails or serving neat spirits, is that we are helping to dilute the drink. The interplay between cooling and dilution is what makes proper use of ice so important. Put simply, the more ice you have, the slower it will melt and the quicker it will cool your drink down whilst achieving a controlled dilution. One or two ice cubes floating around in your drink will melt very quickly and by the time you’re halfway through it, it’ll be watery and warm. If your glass is filled with ice, the liquid inside it will cool down quickly and the ice will stay frozen for longer, resulting in a consistently cold and balanced drink. When we make cocktails, the same principle applies; if you mix a drink using only a small amount of ice, it will melt into water, mix with your other ingredients and leave you with a thin, washy cocktail. If you fill your shaker all the way up, however, the ice will melt slowly, the drink will cool fast, and it will maintain a desirable texture.

It’s not just the amount of ice that will have an effect on your drinks either – the size and quality of your ice is just as important. A big, beautiful chunk of ice has less surface area than a lot of smaller cubes, so there’s less surface melt. A big ice cube shaken in a tin will provide a shaken drink with a wonderful frothy, foamy texture. This is also handy to keep in mind for drinks with dairy or egg whites as it makes easy work of breaking them up and emulsifying the proteins. This large ice wouldn’t be appropriate for drinks like a Julep, though. For this, we need small, pellet sized ice, or crushed ice. When mixed with the small amount of liquid in the drink to begin with this crushed ice cools the drink down very quickly, providing enough dilution to give the drink volume whilst maintaining enough consistency to give the cocktail its distinctive texture.

There are two main sizes of ice you’ll want if you’re making drinks at home and a number of ways to make them yourself using your freezer and a few bits of simple kit. First and most widely used are your standard cubes. These can, of course, be made in an ice tray, they can be bought in bags, and they can be made by freezing a big block of ice and breaking it up. When making or buying ice cubes you’re always looking for maximum surface-area-to-volume ratio. Try to avoid novelty ice trays or shapes with a lot of corners and edges and always try to go for larger cubes where possible.

If you want to make block ice at home you can try using old takeaway containers or Tupperware boxes. Make sure not to fill them all the way to the rim, because the ice will expand as it freezes, and give yourself enough time as they will freeze much slower than in your average ice tray. To turn your blocks into cubes, once they are frozen, take them out and put them in a plastic bag. Wrap the plastic bag in a tea towel and hit with anything hard enough to start breaking the ice. Spread your shots out and try and hit it with conviction so you achieve nice-sized chunks and not mush. You’re trying to get a couple of good full fractures across the ice, so hitting it with something that has a bit of an edge on it will help. Be very careful if you use a knife! A rolling pin is actually very good as the contact point is not that large. 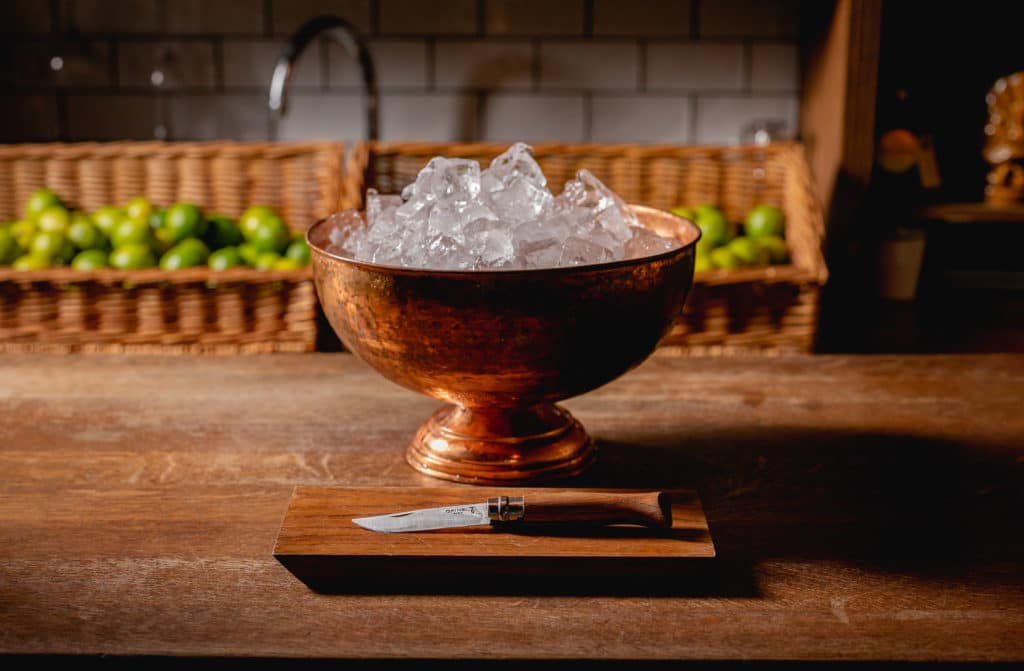 The second size of ice, and the next most widely used in cocktail-making, is crushed ice or pellets. This can be made really easily. In fact, the clue’s in the name. By taking your cubes or block ice and repeating the aforementioned process – bagging it up, wrapping it in a towel and hitting with something heavy – you can easily make yourself a healthy mound of crushed ice. Be sure not to pulverise your ice too much though as, again, nobody wants to end up with mush.

When talking about quality, there are a few factors to consider. Bad ice can add odd odours and off flavours, whilst also playing havoc with the balance of your drink. Ice with lots of impurities can add too much dilution by shattering whilst it’s shaken or stirred. For these reasons, in general, the clearer the ice is, the purer it is. But making clear, pure ice at home can be easier said than done.

Homemade ice looks cloudy because the water used to make the cubes has been frozen from the outside in. This means the impurities, like dissolved minerals and gases, have been pushed to the centre of the ice cube during crystallisation. Not only can these cubes look pretty unappealing at times, they’re also actually much lower quality than a clear ice cube because they melt much faster. This is the key reason why clear ice trumps cloudy ice, and why your whisky on the rocks becomes a watery mess quite quickly with the latter.

If you’re from a cold country or have ever visited one during the winter, you’ll probably have noticed the almost see-through quality of icicles hanging off drainpipes and trees. The reason why icicles are so clear is due to the slow speed at which they form. One layer forms on top of the other very gradually, preventing air and other impurities from being trapped inside.

We’ll be honest – achieving this effect at home is not for the faint of heart, but is more than possible with a little patience. The first method is to slow the rate at which you freeze your ice. This may sound slightly worrying, and perhaps you are thinking you will have to turn your freezer temperature down and ruin its contents, but there is a simpler and less costly way to get the effect: if you can fit a thermal box in your freezer, simply place your tray(s) of ice, or other containers, into them and this will slow the freezing process down whilst simultaneously preventing the natural gasses and impurities from getting trapped in the centre of the ice. Minor impurities may appear at the edges of big blocks, but you can easily chip these off.

The second method is to try and remove as many impurities and gasses possible beforehand. You can do this by using distilled water, boiling it twice then remembering to allow to cool. This is because boiled water, confusingly, freezes quicker than chilled so we don’t want to speed up the freezing process. Without the requisite equipment, however, distilled water may be a little tricky to make and get hold of, so you could try using a combination of both methods above by first boiling off your water for about 5-10 minutes, letting it cool off, and then slow-freezing it, or using the slow-freezing method with mineral water.

As we said, however, the above is not for the faint of heart and we recommend that when making cocktails at home, the quickest and easiest solution is to buy cubed ice. Shop-bought ice tends to be made from mineral water anyway, meaning fewer impurities. It also comes in large bags and is fairly inexpensive, especially when considering the amount of time it would take you to freeze an equivalent amount. Of course, if you’re feeling up to the task – or if you’re just mixing a drink for yourself or making a couple of high-balls – feel free to give it a try and let us know how you get on!