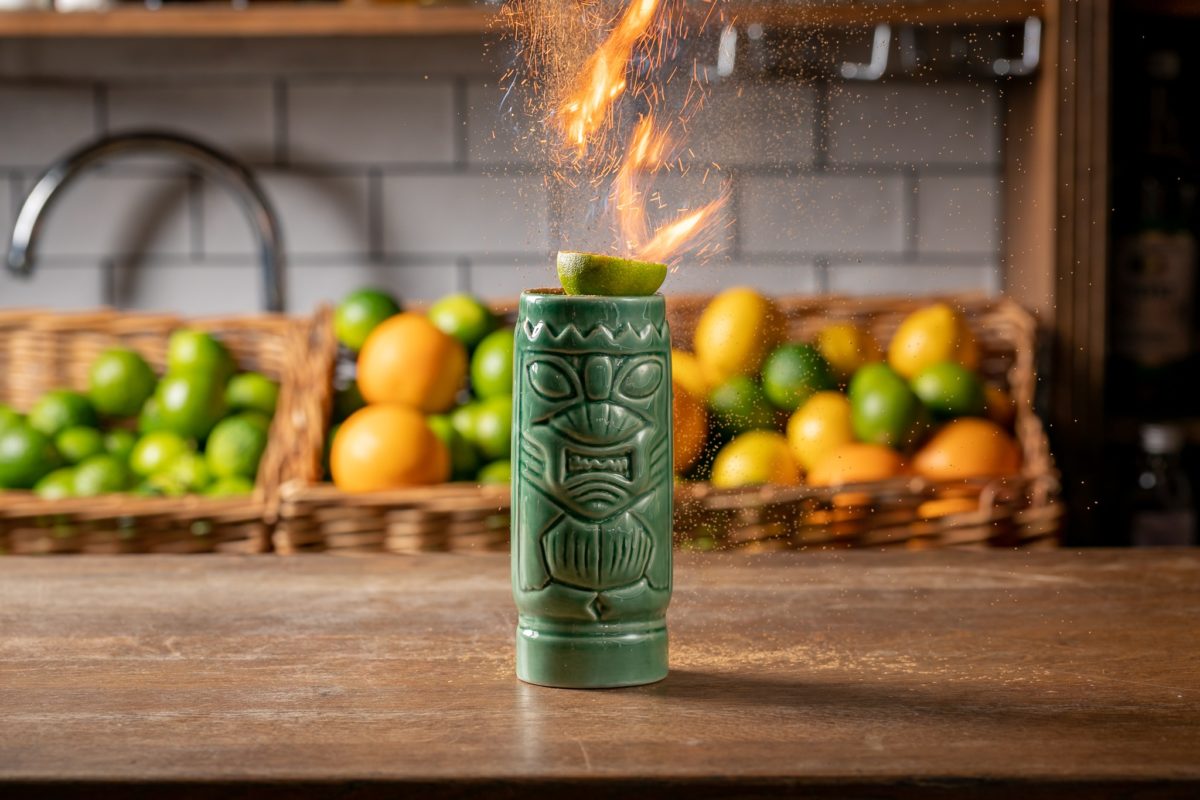 This well-known tiki classic was created by one of the forefathers of tiki cocktails; Victor Bergeron aka Trader Vic. This heady mixture of spirits is traditionally finished with the unusual addition of cream Sherry, our version replaces this with overproof rum to give some extra banana-y sweetness and a fiery flourish to this vibrant cocktail.

In a Boston glass or shaker, using the jigger to measure, add the spirits (apart from op rum), orange juice and orgeat.

Cut your lime in half and squeeze the juice from one half into the shaker for roughly 15ml of lime juice.

Save the squeezed lime half to use for garnish.

Fill with cubed ice and seal using the tin.

Strain into a high ball or tiki glass.

Fill with fresh cubed ice /or the ice from your shaker.

Pour 5ml of grenadine over the back of a spoon into the drink.

Use your thumbs to hollow out the squeezed lime half, turning it into a little bowl.

Fill the hollowed out lime half with the overproof rum and use a match to set it alight.

Sprinkle a few small pinches of cinnamon over the flame to create some pyrotechnics and to caramelise some cinnamon for your garnish.

Blow out the flame, pour the overproof rum into the drink.

Use a straw to stir the overproof rum and cinnamon in.

Garnish with a cocktail umbrella.

Sometimes referred to as the Long Island Iced Tea of tropical drinks, the Fog Cutter uses a unique combination of rum, cognac, gin and pisco to give an unparalleled range and complexity of spirit flavour. These ingredients are paired with orange juice, citrus and nutty orgeat (almond syrup) to give this punchy drink a delectably mellow, tropical undertone. Finally, in place of the Sherry, our version includes a float of grenadine for some extra sweetness and colour, as well as the final theatrical addition of overproof rum; flamed, and sprinkled with cinnamon. Trader Vic once famously remarked of this cocktail: “Fog Cutter, hell. After two of these, you won’t even see the stuff”.